A display screen made with TFT (thin-film transistor) technology is a liquid crystal display (LCD), common in notebook and laptop computers, that has a transistor for each pixel (that is, for each of the tiny elements that control the illumination of your display). Having a transistor at each pixel means that the current that triggers pixel illumination can be smaller and therefore can be switched on and off more quickly.
glossy
Backlight Technology:

In computing, an optical disc drive (ODD) is a disk drive that uses laser light or electromagnetic waves within or near the visible light spectrum as part of the process of reading or writing data to or from optical discs. Some drives can only read from certain discs, but recent drives can both read and record, also called burners or writers. Compact disks, DVDs, and Blu-ray disks are common types of optical media which can be read and recorded by such drives. Optical disc drives that are no longer in production include CD-ROM drive, CD writer drive, and combo (CD-RW/DVD-ROM) drive. As of 2015, DVD writer drive is the most common for desktop PCs and laptops. There are also the DVD-ROM drive, BD-ROM drive, Blu-ray Disc combo (BD-ROM/DVD±RW/CD-RW) drive, and Blu-ray Disc writer drive.
No DVD
Storage Size:

A memory card reader is a device for accessing the data on a memory card such as a CompactFlash (CF), Secure Digital (SD) or MultiMediaCard (MMC). Most card readers also offer write capability, and together with the card, this can function as a pen drive.
Yes
Memory Card Support:
SD
Battery eMachines 355-131G25Ikk
Battery Capacity:
2200 mAh
Number of Battery Cells:
3
Battery Chemistry:

An electric battery is a device consisting of two or more electrochemical cells that convert stored chemical energy into electrical energy. Each cell has a positive terminal, or cathode, and a negative terminal, or anode. The terminal marked positive is at a higher electrical potential energy than is the terminal marked negative. The terminal marked positive is the source of electrons that when connected to an external circuit will flow and deliver energy to an external device. When a battery is connected to an external circuit, electrolytes are able to move as ions within, allowing the chemical reactions to be completed at the separate terminals and so deliver energy to the external circuit. It is the movement of those ions within the battery which allows current to flow out of the battery to perform work.
Li-Ion
Input Devices eMachines 355-131G25Ikk
Pointing Device Type:

A pointing device is an input interface (specifically a human interface device) that allows a user to input spatial (i.e., continuous and multi-dimensional) data to a computer. CAD systems and graphical user interfaces (GUI) allow the user to control and provide data to the computer using physical gestures by moving a hand-held mouse or similar device across the surface of the physical desktop and activating switches on the mouse. Movements of the pointing device are echoed on the screen by movements of the pointer (or cursor) and other visual changes. Common gestures are point and click and drag and drop.
Touchpad
Audio eMachines 355-131G25Ikk
Speakers:
Yes
Microphone:
Yes
Detailed Specs eMachines 355-131G25Ikk
Webcam:
Yes, 0.3 million pixels
Features:
Lock slot
Dimensions (HxWxT):
259x185x25.2 mm
Weight:
1.25 kg 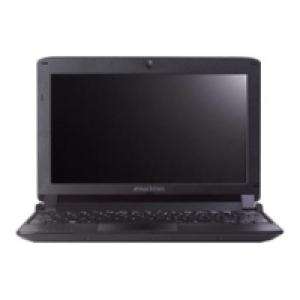