Monitor size is measured by the distance from one corner of the screens viewable area to the diagonally opposite corner. With CRTs, the number is generally about an inch greater than the actual area.
12.0 Inches (30.48 cm)
Display Resolution:

CPU (pronounced as separate letters) is the abbreviation for central processing unit. Sometimes referred to simply as the central processor, but more commonly called processor, the CPU is the brains of the computer where most calculations take place. In terms of computing power, the CPU is the most important element of a computer system.
Intel Core M3-6Y30 (6th Gen)
CPU Speed:

The clock rate typically refers to the frequency at which a chip like a central processing unit (CPU), one core of a multi-core processor, is running and is used as an indicator of the processors speed. It is measured in clock cycles per second or its equivalent, the SI unit hertz (Hz). The clock rate of the first generation of computers was measured in hertz or KHz (kHz), but in the 21st century the speed of modern CPUs is commonly advertised in gigahertz (GHz). This metric is most useful when comparing processors within the same family, holding constant other features that may impact performance.
1.0 Ghz
Graphic Processor:
Intel HD 515
Memory Apple MacBook MLH72HN/A
Capacity:
8 GB
RAM type:
LPDDR3
RAM speed:

Bluetooth is a wireless technology standard for exchanging data over short distances (using short-wavelength UHF radio waves in the ISM band from 2.4 to 2.485 GHz) from fixed and mobile devices, and building personal area networks (PANs). Invented by telecom vendor Ericsson in 1994, it was originally conceived as a wireless alternative to RS-232 data cables. It can connect several devices, overcoming problems of synchronization.
Yes
Bluetooth Version:
4.0
Ports Apple MacBook MLH72HN/A
HDMI:

Abbreviated VGA, Video Graphics Array is a standard type of connection for video devices such as monitors and projectors. VGA cables have 15-pin connectors: 5 pins at the top, 5 in the middle, and the other 5 at the very bottom. The picture at the top of this page is an example of a VGA cable showing all 15 pins.
Yes
Media Apple MacBook MLH72HN/A
Web-cam:
Yes
Audio Solution:
HD Audio Solution
Speakers:
Stereo Speakers
In-built Microphone:
Yes
Microphone Type:
Dual Microphone
Peripherals Apple MacBook MLH72HN/A
Pointing Device:
Force Touch trackpad
Keyboard:
Full-size keyboard 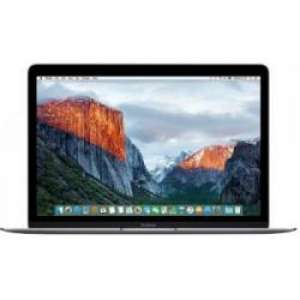