The clock rate typically refers to the frequency at which a chip like a central processing unit (CPU), one core of a multi-core processor, is running and is used as an indicator of the processors speed. It is measured in clock cycles per second or its equivalent, the SI unit hertz (Hz). The clock rate of the first generation of computers was measured in hertz or kilohertz (kHz), but in the 21st century the speed of modern CPUs is commonly advertised in GigaHertz (GHz). This metric is most useful when comparing processors within the same family, holding constant other features that may impact performance. Video card and CPU manufacturers commonly select their highest performing units from a manufacturing batch and set their maximum clock rate higher, fetching a higher price.
1.20 GHz
Number of cores:

Some cameras offer a digital zoom, which is simply some in-camera image processing. When you use a digital zoom, the camera enlarges the image area at the center of the frame and trims away the outside edges of the picture. The result is the same as when you open an image in your photo-editing program, crop away the edges of the picture, and then enlarge the remaining portion of the photo.
yes
Dual-colour LED flash:
no
Video formats:
H.263, H.264, MPEG4
Addidtional:
AF
Secondary camera Oppo 1107
Camera location:
Front
Photo matrix:
2 Mpx
Resolution:
1600x1200 px
Dual-colour LED flash:
no
Addidtional:
FF
Data transfer Oppo 1107
xHTML:

As the World Wide Web Consortium (W3C) describes it, XHTML (Extensible Hypertext Markup Language) is a reformulation of HTML 4.0 as an application of the Extensible Markup Language (XML). For readers unacquainted with either term, HTML is the set of codes (that is the "markup language") that a writer puts into a document to make it displayable on the World Wide Web. HTML 4 is the current version of it. XML is a structured set of rules for how one might define any kind of data to be shared on the Web. It is called an "extensible" markup language because anyone can invent a particular set of markup for a particular purpose and as long as everyone uses it (the writer and an application program at the receiver is end), it can be adapted and used for many purposes - including, as it happens, describing the appearance of a Web page. That being the case, it seemed desirable to reframe HTML in terms of XML. The result is XHTML, a particular application of XML for "expressing" Web pages.
yes
WAP:

WAP (Wireless Application Protocol) is a specification for a set of communication protocols to standardize the way that wireless devices, such as cellular telephones and radio transceivers, can be used for Internet access, including e-mail, the World Wide Web, newsgroups, and instant messaging. While Internet access has been possible in the past, different manufacturers have used different technologies. In the future, devices and service systems that use WAP will be able to interoperate.
yes, v2.0
HSDPA:

HSDPA (High-Speed Downlink Packet Access) is a packet-based mobile telephony protocol used in 3G UMTS radio networks to increase data capacity and speed up transfer rates. HSDPA, which evolved from the WCDMA standard, provides download speeds at least five times faster than earlier versions of UMTS, allowing users of HSDPA networks a broader selection of video and music downloads. HSPDA specifies data transfer speeds of up to 14.4 Mbps per cell for downloads and 2 Mbps per cell for uploads. In practice, users are more likely to experience throughput speeds of 400-700 Kbps, with bursts of up to 1 Mbps.
yes, 42.00 Mbit/s
HSUPA:

HSUPA stands for high-speed uplink packet access, and is an upgrade to UMTS that allows for uplink connections as fast as 5.76Mbps. HSUPA is similar to EV-DO Rev A in that it can be added to existing networks to increase upload speeds from compatible devices.
yes, 5.76 Mbit/s
HSPA:

The term HSPA (High Speed Packet Access) is commonly used to refer to UMTS based 3G networks that support both HSDPA and HSUPA data for improved download and upload speeds. HSPA can also be used to refer to the entire family of related systems, which includes the upcoming HSPA+.
yes
HSPA+:

Evolved High Speed Packet Access, or HSPA+, or HSPA(Plus), or HSPAP is a technical standard for wireless, broadband telecommunication. It is the second phase of HSPA which has been introduced in 3GPP release 7 and being further improved in later 3GPP releases. HSPA+ can achieve data rates of up to 42.2 Mbit/s.
yes
GPRS:

General packet radio service, or GPRS, is a wireless data service that enables you send information across a mobile phone network. It is used for second- and third-generation mobile phones for multi-media messaging, Internet access and various applications.
yes, class 12
EDGE:

EDGE is a data system used on top of GSM networks that provides faster data speeds than GPRS, the technology it makes obsolete. It has a theoretical maximum downlink data rate of nearly 475Kbps, which qualifies it as a 3G technology based on ITU guidelines, even if typical implementations are configured for non-3G speeds. Generally, it is referred to as 2.75G.
yes
Bluetooth:

Bluetooth first appeared as a consumer technology in 2000 and it is still going strong. It is a wireless communication protocol for connecting devices through the air - it is slower than Wi-Fi but is often simpler to set up, and is usually preferred for device-to-device transfers.
yes, v4.0
A2DP Profile:

A2DP (Advanced Audio Distribution Profile) is a technology allowing stereo sound to be streamed via Bluetooth from any audio source (mobile phone, PC or laptop) to a stereo speaker or headset. To do so both the source and the speaker need to support this profile.
yes
WiFi:

Wi-Fi is the name of a popular wireless networking technology that uses radio waves to provide wireless high-speed Internet and network connections. A common misconception is that the term Wi-Fi is short for "wireless fidelity," however this is not the case. Wi-Fi is simply a trademarked phrase that means IEEE 802.11x.
yes, v802.11 b/g/n
WiFi frequencies:
2.4 GHz
Hotspot WiFi:

USB (Universal Serial Bus) is the most popular connection used to connect a computer to devices such as digital cameras, printers, scanners, and external hard drives. USB is a cross-platform technology that is supported by most of the major operating systems. On Windows, it can be used with Windows 98 and higher. USB is a hot-swappable technology, meaning that USB devices can be added and removed without having to restart the computer. USB is also “plug and play”. When you connect a USB device to your PC, Windows should detect the device and even install the drivers needed to use it.
yes, v2.0
GPS module:

A GPS navigation device or GPS receiver, and when used for vehicle navigation commonly referred to simply as a GPS, is a device that is capable of receiving information from GPS satellites and then to accurately calculate its geographical location. The Global Positioning System (GPS) is a global navigation satellite system (GNSS) made up of a network of a minimum of 24, but currently 30, satellites placed into orbit by the U.S. Department of Defense.
yes
A-GPS:

A-GPS augments that by using cell tower data to enhance quality and precision when in poor satellite signal conditions. In exceptionally poor signal conditions, for example in urban areas, satellite signals may exhibit multipath propagation where signals skip off structures, or are weakened by meteorological conditions or tree canopy. Some standalone GPS navigators used in poor conditions can not fix a position because of satellite signal fracture, and must wait for better satellite reception. A GPS unit may need as long as 12.5 minutes (the time needed to download the GPS almanac and ephemerides) to resolve the problem and be able to provide a correct location.
yes
NFC:


Comments, questions and answers to Oppo 1107 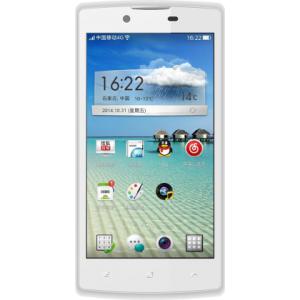