There are generally three types of SIM card still in use today. There is a Standard SIM, a smaller Micro SIM and an even smaller Nano SIM. The type you will need depends entirely on the handset you have bought, although there are ways you can make a SIM work with whatever phone you have.
Micro SIM Card, Nano SIM Card
CPU:
MSM8916
Processor:

A mobile processor is found in mobile computers and cellphones. A CPU chip is designed for portable computers, it is typically housed in a smaller chip package, but more importantly, in order to run cooler, it uses lower voltages than its desktop counterpart and has more "sleep mode" capability. A mobile processor can be throttled down to different power levels or sections of the chip can be turned off entirely when not in use. Further, the clock frequency may be stepped down under low processor loads. This stepping down conserves power and prolongs battery life.
Quad Core
Operating System:

Is an operating system for smartphones, tablets, PDAs, or other mobile devices. While computers such as the typical laptop are mobile, the operating systems usually used on them are not considered mobile ones as they were originally designed for bigger stationary desktop computers that historically did not have or need specific "mobile" features. Mobile operating systems combine features of a personal computer operating system with other features useful for mobile or handheld use; usually including, and most of the following considered essential in modern mobile systems; a touchscreen, cellular, Bluetooth, Wi-Fi, GPS mobile navigation, camera, video camera, speech recognition, voice recorder, music player, near field communication and infrared blaster.
Android 5.1
RAM:

The Global Positioning System (GPS) is a space-based navigation system that provides location and time information in all weather conditions, anywhere on or near the Earth where there is an unobstructed line of sight to four or more GPS satellites.
Yes
Bluetooth:

Bluetooth is a wireless technology for exchanging data over short distances. The chip can be plugged into computers, digital cameras and mobile phones.
Yes
Display OPPO A33M 16GB
Screen Size:

Is the physical size of the area where pictures and videos are displayed. The size of a screen is usually described by the length of its diagonal, which is the distance between opposite corners, usually in inches.
5.0 inch
Screen Type:
Capacitive
Resolution:


Ask a question about OPPO A33M 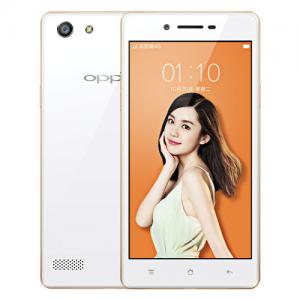