ADSL (Asymmetric Digital Subscriber Line) is a technology for transmitting digital information at a high bandwidth on existing phone lines to homes and businesses. Unlike regular dialup phone service, ADSL provides continously-available, "always on" connection. ADSL is asymmetric in that it uses most of the channel to transmit downstream to the user and only a small part to receive information from the user. ADSL simultaneously accommodates analog (voice) information on the same line. ADSL is generally offered at downstream data rates from 512 Kbps to about 6 Mbps. A form of ADSL, known as Universal ADSL or G.lite, has been approved as a standard by the ITU-TS.
Support ADSL2 +:

ADSL2 is a standard for delivering internet connectivity through telephone connections. It is designed to work approximately twice as quickly as ADSL. This means speed of up to 24Mb/s for downloads and 3.5Mb/s for uploads are theoretically possible. ADSL2+ (ITU G.992.5) doubles the bandwidth used for downstream data transmission, effectively doubling the maximum downstream data rates, and achieving rates of 20 Mbps on telephone lines as long at 5,000 feet. ADSL2+ solutions will interoperate with ADSL and ADSL2, as well as with ADSL2+. ADSL2+ will include all the feature and performance benefits of ADSL2 while maintaining the capability to interoperate with legacy ADSL equipment.
Yes
Placement:
external
Interface:
Ethernet 10/100 Base-T
Digital Modem Options ZTE ZXDSL 831CII
Built-in switch:
Yes
The number of switch ports:
4 x Ethernet 10/100 Base-T
Management ZTE ZXDSL 831CII
Web-interface:

A Web Interface is built into modem, enabling them to be controlled remotely.
Yes
Support for SNMP:

Network Address Translation (NAT) is the process where a network device, usually a firewall, assigns a public address to a computer (or group of computers) inside a private network. The main use of NAT is to limit the number of public IP addresses an organization or company must use, for both economy and security purposes.
Yes
DHCP-server:

Dynamic Host Configuration Protocol (DHCP) is a client/server protocol that automatically provides an Internet Protocol (IP) host with its IP address and other related configuration information such as the subnet mask and default gateway. RFCs 2131 and 2132 define DHCP as an Internet Engineering Task Force (IETF) standard based on Bootstrap Protocol (BOOTP), a protocol with which DHCP shares many implementation details. DHCP allows hosts to obtain necessary TCP/IP configuration information from a DHCP server.
Yes
Static Routing:

Static routing, the alternative to dynamic routing, is the process in which the system network administrator would manually configure network routers with all the information necessary for successful packet forwarding. The administrator constructs the routing table in every router by putting in the entries for every network that could be a destination. Static routes to network destinations are unchangeable.
Yes
Dynamic routing protocols:
RIP v1, RIP v2
Other Features Of ZTE ZXDSL 831CII 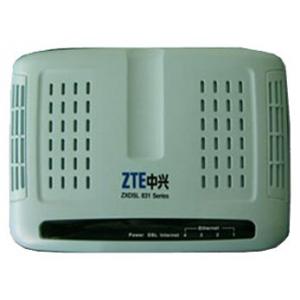